COVID-19 statement: For 2021 I am taking new bookings from July onwards. Any event which Covid restrictions prevent from happening can reschedule without loss of deposit. That's one less stress for you! Guest numbers might need to be limited in line with government guidelines.

Tha mi a'chuir fàilte Oirbh! I welcome you! My name is Scot AnSgeulaiche. As a Seanachaidh or Tradition Bearer of the Highlands, one of our many wedding customs that I do my best to keep alive is Handfasting Weddings as a celebrant. It is a form of ceremony found in many places and cultures, perhaps rarely nowadays, but I keep alive a Scottish style of it to benefit both the natives of Scotland and also for ex-pats from Canada, Australia, England and the USA who are coming to the homeland to be married, Scottish style. I live in Scotland so can bring living culture from the Highlands to your wedding, including Jumping the Besom (broom) and Gàidhlig (Gaelic) poetry. Most of my work is in Scotland, but I have hosted handfasting ceremonies of marriage in England, France and Celtic Breizh (Brittany / Bretagne) in a mix of English, French and Brezonheg. 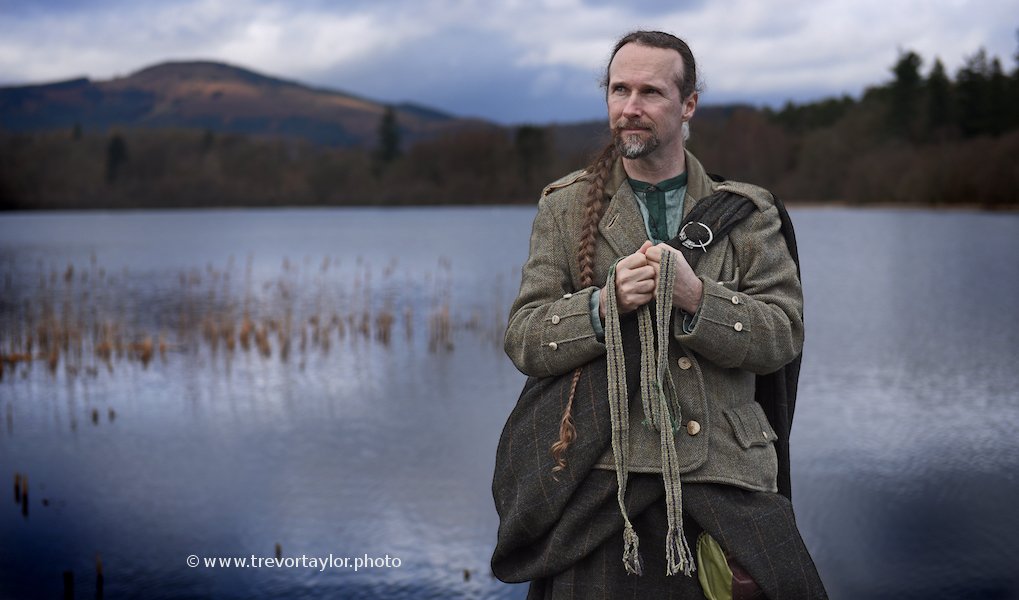 Why Couples Come To Me For Their Wedding Ceremony

~ The most important thing that I offer is a ceremony that you and your guests are engaged in and has meaning: This comes from long training, 20 years experience in holding ceremony, and wedding ceremonies for 16 of those years.

~ I tailor-make the ceremony (marriage, renewal, betrothal or naming) around you, the couple, over many weeks of preparation. This allows you to bring in ideas not normally catered for within religious or civil ceremonies, and to leave out that which is not relevant to you.

~ I am one of the few people in Scotland who offer a handfasting ceremony that draws from Scottish tradition (and not from questionable internet sources! See history below.)

~ The ceremony is spiritual / emotional and is religious only if you want that. I have performed ceremonies for Pagans, Catholics, LGBT couples, the non-religious and 'mixed' marriages.

A video to give you a feel for my handfasting ceremonies and wedding Tales. 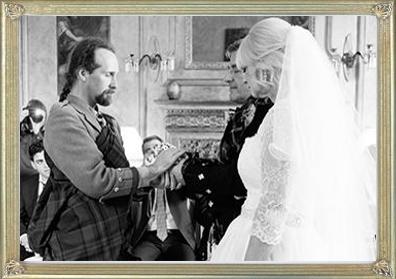 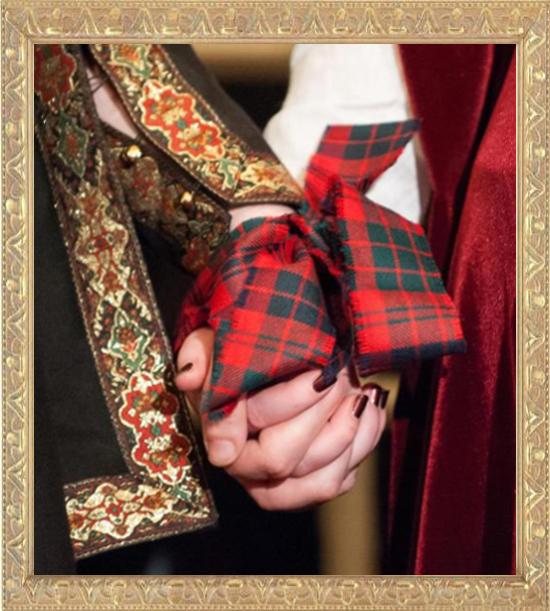 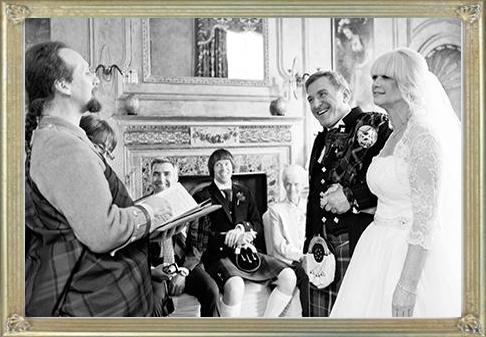 That's The Overview. Want Some Detail?

So What's Involved In A Hand Fasting Ceremony? 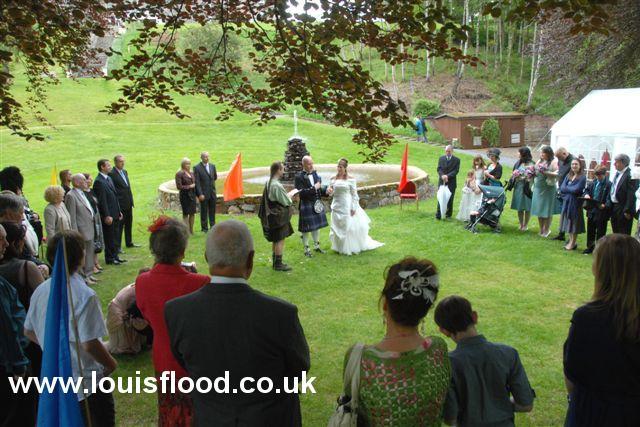 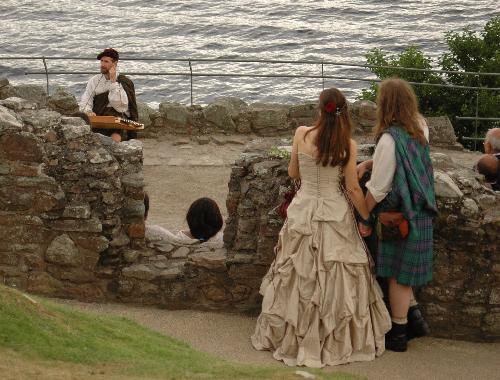 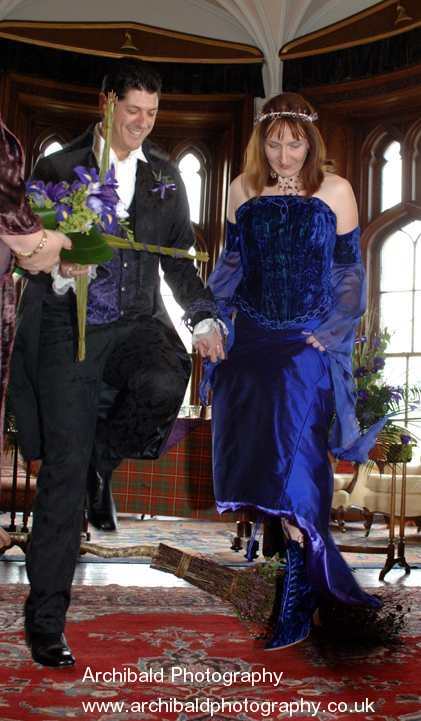 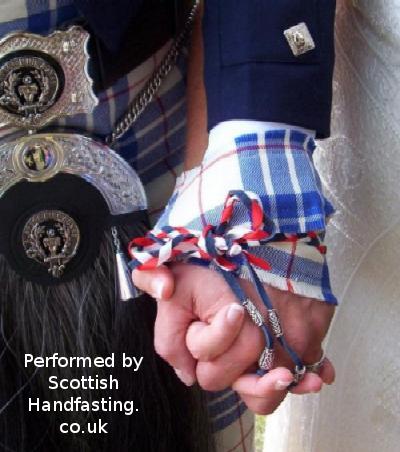 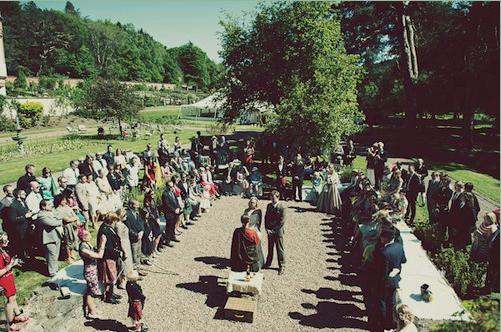 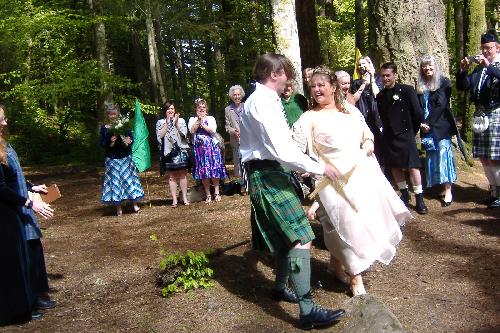 Sara and Ian jumping the besom at the Hermitage 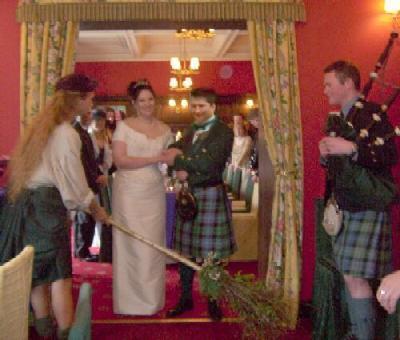 While every ceremony is uniquely created around you, it might be similar to the following. I welcome the guests to the ceremony space and stand or seat them in a circle (always in a circle or oval, never rows, so make sure your venue can accommodate that). I welcome you, the Bride and Groom, into the circle of your people. I speak some words of introduction about marriage, your families, the choice of day or choice of ceremony location in Scotland, if these are special to you, perhaps some old Gàidhlig poetry or prose on the theme of marriage (and translate it). Then we begin. The guests are invited to 'set a ground' of ceremony, perhaps through calling in the Four Elements, Earth, Air Fire and Water. The assembled company might contribute words of their own through readings. We ask who will support you in your marriage - like guardians. You give your verbal declarations to each other, your vows, written by you, explaining why you want to marry; what you are asking for from the relationship, what you appreciate in the other. I call for the Bann to handfast you by, introduce its symbolism, then tie the knot, binding you together in a physical way. You might also exchange rings. Perhaps you would share a drink from the Cuach - the communal whisky drinking cup (quaich). As the ceremony ends, I might call for the Besom (An Sguab), so that you may jump it and begin your life together. Perhaps the groom will take Bride's Cross over the threshold of the besom and later into your home. A family member welcomes you once you have jumped the Besom. You leave the circle and walk around the outside of your people, then are welcomed back into their circle, having taken your first steps as a couple, sweeping out the old and in the new. The details are of course, special to you, and indeed, the above is not a set format, but rather a typical structure that we, together, create to your wishes. A ceremony lasts about 45 minutes (from guests-in to couple out).

While I do come with a pallette of colours drawn from the Scottish traditions, I am keen to make couples a part of creating their own ceremony and as such will ask you many questions as I write the ceremony so that you can accommodate those little things that would make it your own. I don't for instance write your vows - they're your vows after all. As a client said when I asked him why handfasting "This type of ceremony seems to allow us much more control over how we get married and what we can say to each other during the ceremony." (Kristian 2016).

I don't, however, accept every request to perform a handfasting marriage ceremony that I get, so it is important for those wishing to engage my services to fully read this page and understand what I do and what handfasting is NOT. I perform about 15 ceremonies a year and no more.

What This Ceremony Is Not

Handfasting is not a form of entertainment, re-enactment or a simple "Celtic Blessing" on the end of a church wedding. It is a wedding ceremony in itself. As such, I do not offer a handfasting after any other faith-based marriage ceremony (including Humanist).

If you are having a civil / legal service, the page on Civil and Handfasting combined must also be read, as there are important considerations.

"Victoria and I wanted to thank you from the bottom of our hearts for the ceremony last week. It really was perfect. Everyone had a very special time and it was so good to see how many of our family really reflected on your words. For many of them I think it made a lasting impact on how they viewed their relationships and lives together. You'll be glad to hear the bosom has also taken pride of place in our house so I now have no excuse to get some practice in. Thank you for taking the time and care to create it as well as you have." James and Victoria, August 2017

The Story Of HandFasting In My Tradition

Hand-Fasting probably comes from Scandanavian Christian and pre-Christian practices introduced to Scotland before 1000 AD. It was still popular in the 15-1600s. It was a form of Betrothal. Some historians have interpreted this as a trial marriage of a year and a day. It may have been so in some places in the Scottish Borders. 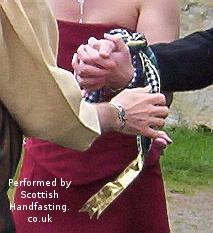 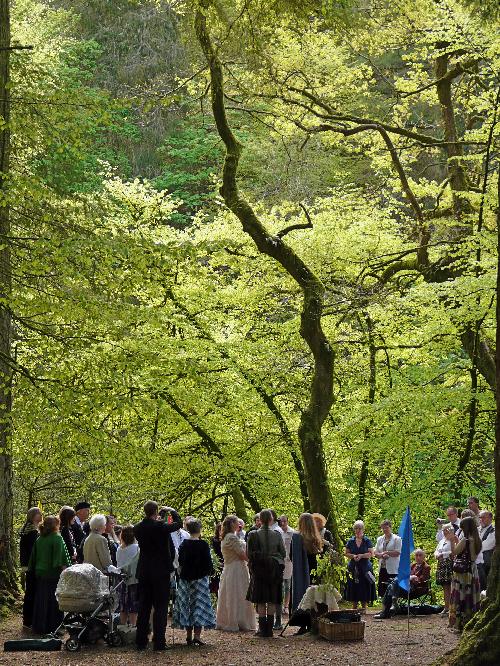 Handfasting at The Hermitage 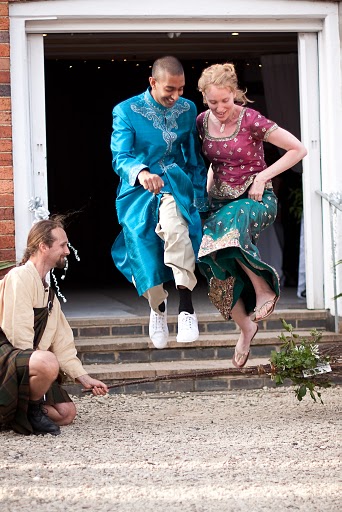 Jenny and Matt jumping the besom 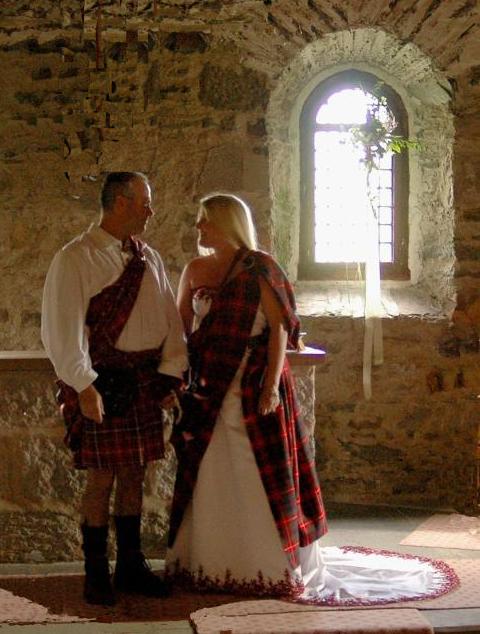 A Renewal of Vows, Jeana and Glen, USA, in clan plaids

In a Handfasting, the hands were bound by the bann (ribbon or chord), rather than by rings. Under older Canon Law, public figures, other than priests, would sometimes perform the wedding: Blacksmiths, Seanachaidhean (like myself), clann chiefs and so on, although it was the vows before the family that made their marriage legal, not the celebrant. The law changed in the 1600s allowing only church ministers to perform marriage, but the practice of binding the hands had become popular and so some Scottish churches were still using hand-fasting as part of weddings up until the early 20th Century.
For a detailed, properly researched historical account of Handfasting see MedievalScotland.org

"Hi Scot, Paul and I just wanted to say a big thank you for the lovely handfasting you performed for us. Everyone has commented on how intimate and beautiful the ceremony was -and the wording was perfect. Many thanks, Tina" Paul and Tina Strong Jan 2011, Edinburgh.

In more modern times, the binding of the hands has been used more often as part of the actual marriage ceremony, rather than the betrothal (although I am called to perform betrothals a few times a year). Handfasting is found in a number of traditions around the world. Many couples choose a hand fasting ceremony because it allows them to express who they are as a couple. Sometimes a couple's spirituality is not represented by the major religions, or they are daunted by the stress of modern wedding forms, or the lack of spirituality in a civil marriage isn't enough. They are usually seeking a return to the connection between the couple, through a ceremony that is meaningful to them. You may have seen a handfasting ceremony in Braveheart and been touched by it.

I have been making marriage ceremonies for so long now I have repeat clients, which is not as bad as it sounds! I am very honoured to have been called upon to marry several members of familes and their friends; I have performed renewal of vows for couples that I married first time around and naming ceremonies for their offspring, which is very special.

A Dawn Handfasting at Stonehenge

As an extension of the marriage vow, many couples like to reaffirm their commitment to their relationship. This requires ceremony, of course! Such a ceremony is not greatly different from a wedding and can include many of those elements. As in some ways, a renewal is a bit like wiping the slate clean and being married again for the first time. I have performed a renewal ceremony for those of a Catholic faith also. 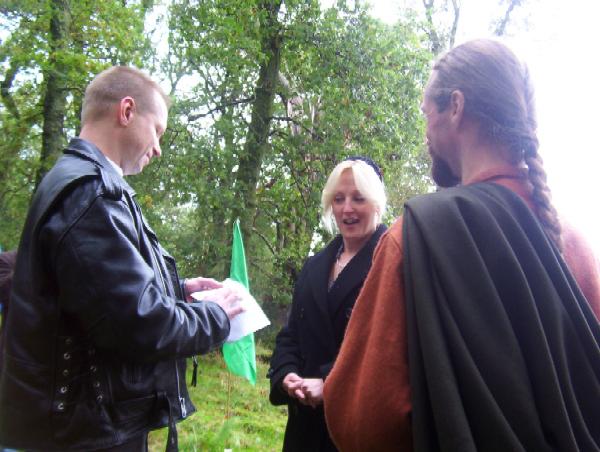 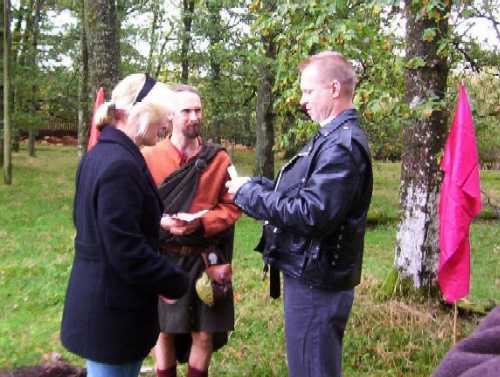 Above, a surprise Renewal of Vows ceremony for Amy (she looks surprised, yes?) arranged by her husband of 10 years, Ed, in a beautiful woodland location on the bonny banks of Loch Lomond, October 2006. "Scot - Thank you so much for such a unique & beautiful way to celebrate our 10 yrs of marriage & 19 years together. For once in my life I was speechless, which anyone who knows me can tell you is a rarity. You told the story of our lives together with such feeling it is something we will always cherish. The gifts we used in our ceremony were beautiful as well, thank you & your wife for taking the time to craft them for our special day. We will be tying the Ban' on our bedpost, sweeping out our home regularly with the Besom & drinking from the Cuach every year as advised. We will remember this for the rest of our lives. I cannot express our gratitude enough. Don't be surprised when we come back & celebrate our 20 yrs together with you as well. Amy & Ed Rusewicz" 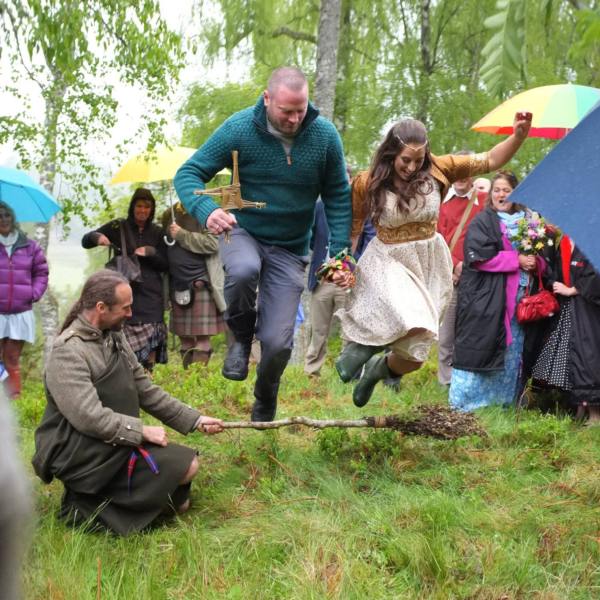 "We would like to say that we really cannot thank you enough for making our day so wonderful. The ceremony you created for us was absolutely perfect. Your words perfectly reflected our relationship and commitment to each other. So many people have commented about how personal and poignant the ceremony was. Your role as MC also went beyond anything we had imagined. Thank you so much for all your hard work and for making our day so special. It was certainly a day that we and all of our guests will remember forever!
I have attached a photo, taken by a family member, which I believe perfectly captures our moment of jumping into our new life together!" Alice and Al, Baideanoch, June 2015

Yes, I do!
The principles that form a Handfasting, can equally host a naming ceremony. Apply through the form on the Fees/ Booking link below and let me know that it is a naming ceremony in the "Anything else..." box. 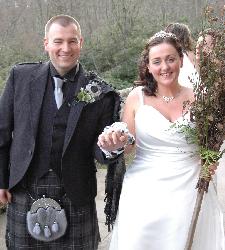 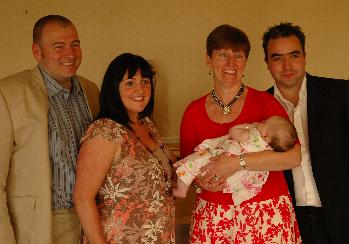 Alex & Gareth married by me, Carbisddale, then Naming Ceremony a year later for their first child Betha.

Visit the Fees / Exchange page to see the options for all ceremonies.